Welcome to Radio Maria! . . . a Christian voice in your home! 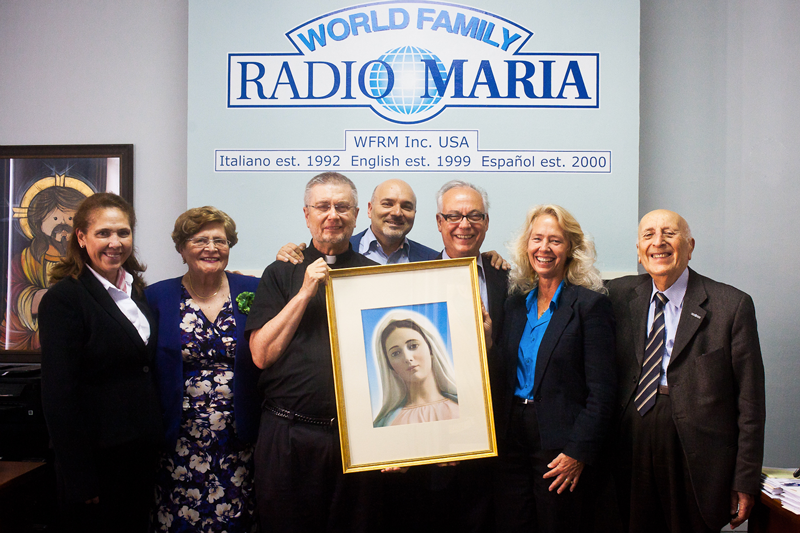 Radio Maria is a private initiative within the Roman Catholic Church. It is part of a worldwide network of Catholic radio stations founded in 1987 as an instrument for the New Evangelization under the patronage of Mary, the Star of Evangelization. We offer a voice of hope and encouragement 24/7 in full communion with the magisterium of the Catholic Church.

Our mission is to help communicate God’s divine love and mercy for all by offering programs to our listeners that are a source of spiritual and human growth. The main themes of our programming are the Liturgy of Hours and the celebration of Mass (which we broadcast live every day), and the Holy Rosary. We also provide catechesis and cover topics concerning the profession of faith, social issues, programs of human and social development, as well as news from the Church and society. The Priest Director has the responsibility of choosing what is broadcast.

Radio Maria has no commercial advertising and receives no funding from any other source. Funding is 100 percent dependent on the generosity of our listeners. Our operations and expansion in the world are entrusted to Divine Providence.

And finally, the operations of Radio Maria, are also heavily dependent on the work of volunteers.  From office work and answering phones, to promotion efforts and the technical aspects of broadcasting from the studio or from a remote in another location, most of the work at Radio Maria is done by volunteers. Even our talented presenters are volunteers!

Radio Maria was born as a parish radio in 1983 in the Diocese of Milan, Italy. Its purpose was to keep parishioners informed and to help them through prayer, the daily Mass and the Rosary.  But it quickly grew in popularity into other countries. In 1998, the World Family of Radio Maria was formed which quickly grew to include 77 stations in the world, broadcasting in 65 languages.  Radio Maria began broadcasting from its first English-speaking station in the US on May 25, 2000 in Alexandria, La.  It has since expanded to include 11 frequencies in six other states, including Texas, Mississippi, Ohio, Wisconsin, Pennsylvania and Florida.

Radio Maria is a tool in the promotion of the New Evangelization. Pope Francis said of Radio Maria,

“God bless the radio, and may Radio Maria be listened to by all of you in your cars, in your kitchens or while you’re working. Everybody has to listen to this radio that is fulfilling the great mission of evangelization. We need Radio Maria to reach everybody throughout the world.”

The World Family Of Radio Maria

World Family is the parent organization for Radio Maria US, with affiliates in 65 countries, broadcasting in more than 40 languages. The affiliates preach and teach the Catholic faith by means of radio programming.

Based in Italy, it works with World Family, Inc., to guide Radio Maria US affiliates throughout the United States in finding resources to sustain operations, and spread Our Lady’s mission for the New Evangelization.

Check for options you can listen us.

Listen to your favorite shows whenever you want.

Download the Radio Maria USA brochure with the detailed program.

Listen to Battle Ready by our Director Fr. Dan Reehil